Openmandriva 2014 lx is out

Openmandriva 2014 lx is out

Apparently Openmandriva 2014 is out as of May 1st https://blog.openmandriva.org/en/2014/0 ... ning-free/ . Can't wait to finally try the final release; downloading now.
Top

Wiil try to upgrade my 2013.0 install..Now lemme see where are those repos...

Doing the stuff now...I have installed quite a lot (including a LAMP server) . Since I run Openbox I did not get an update popup (Maybe it is due to Openbox

..Well the update went through but I have lost my GUI. No kdm: I will have to dive into this one..

When trying to start kdm manually I get

cannot open the file /usr/share/apps/kdm/themes/mandriva-kde4
mandriva-kde4 was not there so I created it...
And that did not help . it still says it cannot find it - probably because the directory is empty

It looks like I did not get the artwork.

Berserks dont give up so I copied the content of /usr/share/apps/kdm/themes/OpenMandriva to mandriva-kde4: 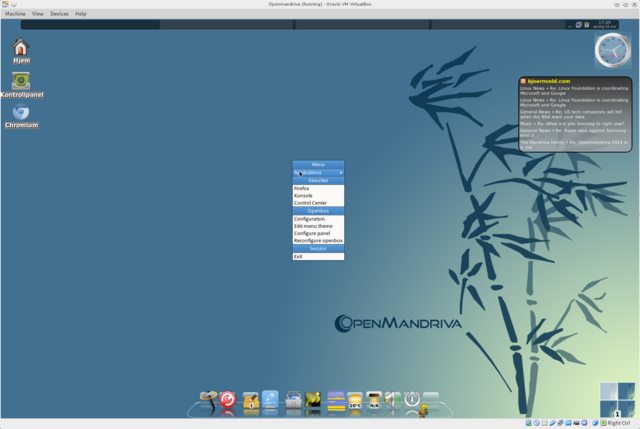 But it could also be that I do not have a full kde install since I use Openbox - I still think that the themes for kdm should be created properly though -since kdm can be used with other DE's.
Here are my data:

Bug reported here
Solution:
Openbox users must make sure that distro-kde4-config-Openmandriva is installed since this regroups OpenMandriva specific KDE-config files.

In any case I decided to install lxdm and drop kdm which probably is the sensible thing to do if you use Openbox anyway.

The new stuff in OpenMandriva that everybody will notice is the choice of Homerun as the menu/launcher.
On the first glance this looks pretty much like the Gnome solution with big icons all over the screen and poor overview.

But you can add a non-fullscren widget of Homerun to your KDE panel - and that actually looks pretty slick and will satisfy the conservative Linux guys who do not like dramatic changes.
And why not have booth? That is no problem. KDE is still a flexible DE - much unlike Gnome3.

Well as much as I wanted to like OMV (perhaps out of Mandriva nostalgia) I unfortunately found myself after two days running back to Manjaro. Its not that Openmandriva 2014 Lx is bad, the product itself is fantastic with great polish, especially considering the size and resources of the developing team. Nevertheless for semi-(non-linux savvy) users like myself who find themselves lost without documentation and active community (try asking a question on the IRC channel), it becomes a no go when system utilities aren't quite available or easily understandable. This is not to say I wont try Openmandriva another day (it does have a solid foundation: stability, speed, the general things works, hands-down the most beautiful of all, and is even the first distro that doesn't hang for 5-10 seconds upon waking this laptop from sleep/suspension) but is still very much feels a works in process understandingly. Since I'm still a bit in the Race to the End with a few things I will need to go back to Ol'Reliable before I can go out experimenting

can't count on Windows for those oh-shit moments after all