Well so I made my traditional adjustments. I think that ROSA rocket bar panel is a bit to dominating so I changed back to the default KDE bottom panel.
1 right-click on the bottom panel->panel options->Remove this panel

It is as easy as that so now we have the good old traditional menu and the slim and sexy bottom panel back in the good old "non-smartphone" way.
But then again that ROSA menu could come in handy so I will add it to the default panel:
right-click on the panel->Panel Options->Add Widgets
Search for SimpleWelcome and drag it to the panel.

Now you have both

Ofcourse you can do it the other way around and drag the traditional KDE menu starter to the ROSA Rocket Panel.
Manjaro 64bit on the main box -Intel(R) Core(TM) i7 CPU 920 @ 2.67GHz and nVidia Corporation GT200b [GeForce GTX 275] (rev a1. + Centos on the server - Arch on the laptop.
"There are no stupid questions - Only stupid answers!"
Top

I'm toying with the idea of trying an upgrade installation from MDV 2011 to ROSA.Desktop.Fresh.2012

to preserve a few custom installations, and following up with a clean install, if that doesn't work, since there might be some free time to do damage, this week.

While you are damaging; the logo contest at OpenMandriva is coming to an end. It will end on the 10th of March at midnight.
It has to be one of these ofcourse:: 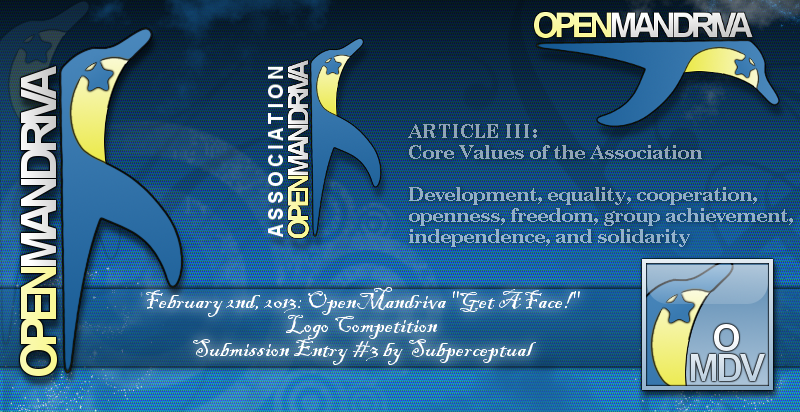 But I must admit there are many good ones.

There is a potential problem there though:
After the common masses have registered (again) on some new site and voted for the favorite - the proletarian dictatorship will gather and decide if the result is acceptable.
They will take the 5 top votes and vote internally - and potentially come up with something other than the top vote.

This is explained as a quality control where the spirit of OpenMandriva is taken care of. This is somewhat surprising since there was set a clear set of rules (no yellow stars etc) on how the "Face" should be presented - so naturally one would think those rules would take care of the "spirit".

And I do not know who the deciding "we" is

By all means; OpenMandriva needs a driving force that is not paralyzed by an overly respect for a majority (of three) - getting things done is way more important.

But I think those deciding forces should be identified (again: maybe they are

I dunno )
But I would be fine with it if the result of the vote is made public and if the internal vote of the "we" is published - if it has another result than the public vote. In that case it should also be explained - and maybe even the vote of every single member of "we" should be made public.

After all I am not loosing to many calories over it - Getting a distro first is more important.
I am not even going to register to vote

Question, please? I'm reading this thread, which says the old forum will be locked at forum.mandriva.com (I'm a tad behind on this stuff, plus the thread is confusing - it's getting old, so I would expect something to have happened with the old forum by now). On top of that, I'm still able to login to the old forum.
I also read somewhere, about a month ago, that it would also be zipped up and archived. Is this true? What exactly is going to happen with the old forum? I am hoping that it will stay up, or just moved to the new openmandriva forum. I have some serious stuff written down there, that I still use to this day.

Mandriva SA has set a deadline for OpenMandriva to set up its own infrastructure:

The servers are now in place and the various OpenMandriva sites are being created or migrated:

The last that I heard was that the Mandriva Forum and wiki would be archived and made publicly available (presumably read only).

Yeah, I see that openmandriva.org is down for maintenance, and has been for some time today (not sure of before that).
I'd rather be a free person who fears terrorists, than be a "safe" person who fears the government.
No gods, no masters.
"A druid is by nature anarchistic, that is, submits to no one."
http://uk.druidcollege.org/faqs.html
Top

The voting is over and here are the 7 candidates.

I have just read something regarding OpenMandriva that is extremely disturbing to me, but I got the link to it in p.m. so am not going to post it unless I get the OK. I can do so without the link to it that I was given if that's OK. I'm not sure where the line's drawn here. The quote itself that I'd post was not given directly to me, just the link to it. Please advise. Thanks.
I'd rather be a free person who fears terrorists, than be a "safe" person who fears the government.
No gods, no masters.
"A druid is by nature anarchistic, that is, submits to no one."
http://uk.druidcollege.org/faqs.html
Top

Sure, I think that's all of general interest, just haven't had time to put some cogent post together about it.

OK, I will not say who sent it to me. If they want to state who they are, that's their prerogative. In reality, the link that was given me in p.m. lead me to this post from the OpenMandriva mailing list, and it is from Per Oyvind. If it's OK, I'll edit this post to give the direct link to it, but again, I'm going to wait for the OK on that. I'll edit the quote portion of the link, but only if given permission to:

As you should be *very* aware of, I am so incredibly tired, fed up and
what not, so this isn't blackmailing about something, but rather what'll
surely be inevitable in such case.

And if I were to do so, you surely would get to experience the issues that
I'm raising here, but that you seem to be unable to comprehend and have
sufficient with insight on since you're not even involved in the
development of the distribution release in question, nor have any previous
experience with it in general either.

Considering my wastly greater experience in all of these things, even for
most of the non-formal responsibilities for the association, I strongly
urge you to acknowledge this and take what I say with my professional
expertize as such rather than blissfully and provokingly dismissing it all
as some childish ego fight.
How am I to take you serious, when you so clearly ignore what I say and not
even interested in discussing the actual issues raised, but rather purely
attack my persona and question in my motives in stead?

I have 12 years of solid experience and involvement on these things for
this distribution, would you rather blindly trust your few months of
experience with setting up the associaton (and none for the actual
distribution that I discuss itself)?

I've been *extremely* patient and professional for a very long while now, I
don't think asking for you to respect my professional integrity as courtesy
is too much to ask for..

Damn straight, Per. You GO.

My respect for OpenMandriva both as a distribution and "association" and "their council" has just dropped to zero. For them to ignore and insult the one person who has been laborious for the release from day one, I say to Charles Schulz and all of them to go eff themselves (of course, NO OFFENSE MEANT [as they said to him in the post itself] *sarcasm).

I have watched Per for ages on this, but didn't realize what he was having to put up with through it all, and certainly didn't realize he was the only one working on the development, other than one other part-time person. He had already, far as I'm concerned, had the full responsibility of it, because everyone else either jumped ship or was too lazy to contribute.

So, since no one has, then I'd like to know, why the hell are they doing this at all, since no one seems to care enough to quit bickering and actually do something for the distro?

This bothers me tremendously, to see a distro that's hung 'round since '98 against a lot of odds (for as long as they did, there were a lot of odds), that I myself used fully (and even contributed money to), stoop to this level of consciousness. Or maybe, it's not the distro itself, but the people in it. I remember when I left the MDV forum now over two years ago (or was unfairly banned, I feel, at the moment I was; I'd done nothing wrong but bring out an issue with the moderator), and at that time, people were all hovering 'round, in particular MDV fanbois, saying "they'd do it, they'd continue the distribution", and no one's done a damn thing in reality but Per.

I'm sorry, but this is an emotional reaction, but logically, I'd be horridly offended if I were him as well. I'm still reading the thread, and am hoping really, that he did end up leaving them with the basket thrown in their laps. Idiots.

And even in the next post, in reply to him, they retract things they've said.

Edit: My question is, would it not have been better to let Mandriva die, just let it die, and know it was a great distro, and have fond memories of it, rather than for everyone to see and go through this stupidity???
Last edited by dedanna1029 on 22 Mar 2013, 18:50, edited 1 time in total.
I'd rather be a free person who fears terrorists, than be a "safe" person who fears the government.
No gods, no masters.
"A druid is by nature anarchistic, that is, submits to no one."
http://uk.druidcollege.org/faqs.html
Top

Per can have a pretty furious Berserk attitude

And that is good

As for Mandriva is has been dead for a while so it is a question of revival.
We have ROSA and that seems to be it by the looks of it. Post the link.
Manjaro 64bit on the main box -Intel(R) Core(TM) i7 CPU 920 @ 2.67GHz and nVidia Corporation GT200b [GeForce GTX 275] (rev a1. + Centos on the server - Arch on the laptop.
"There are no stupid questions - Only stupid answers!"
Top
Locked
303 posts