Raspberry pi A+ is out

I have a SMB server setup and running already with all of my data on it. What I need is a silent low-power PC that I can put XBMC on so I can watch the videos I have on the SMB shares. I also need a silent low-power PC I can put Linux on to act as a router. My issue is that Raspberry Pi's are being marketed as a "$20 PC" when it is missing significant components such as storage, power supply, case, etc. The purchase of the required additional components is actually more than that of the "entire PC" in this case.

Ahhh, so it is a $27 PC that still requires storage. And a power supply. Though you had mentioned before that yours came with a power supply... the ones I have seen available for sale do not typically come with one. My point is still not that it isn't useful, but rather that it is too incomplete to call a "PC" and that the target audience is not poor people who can't afford a $100 PC.

Well I'll try to do the math here: 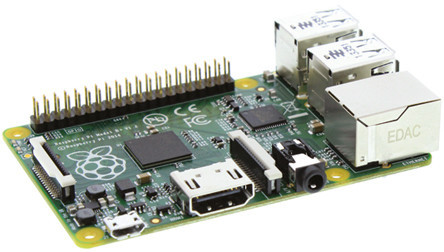 Blame Amazon for that sleazy pricing but anyway all you need after that is your keyboard and your monitor.

In your case you and many with you (like me) could add the VGA adapter so it would add up to $80 ( I don't really need it because I ssh into the box via LAN and move it to my TV for HDMI watching my XBMC media center ).

For that you have pretty much a complete PC. If you want to hook on an 1T USB disk you may have to spend another $59,99 but that cost is not Raspberry Pi specific.

That's not to bad and pretty perfect for schools if they spend $80 ($60 if they have HDMI monitors) for each computer and hook it up to a server for say $1000 then they have a pretty good solution.
Chances are that they already have a desktop that can be used as a server.

viking60 wrote:(Raspberry Pi A+ is more for embedded solutions)

viking60 wrote:Blame Amazon for that sleazy pricing but anyway all you need after that is your keyboard and your monitor.

I blame Amazon and many other review sites and merchant sites... because they are essentially marketing the Raspberry Pi A+ as a $20 full PC that "poor people" can afford, when clearly that is not the intent as you say.

I don't think it makes sense to have a terabyte of storage on a Pi... it is MUCH better suited (as you mentioned) to be used as a client machine. Not necessarily a thin client, but it is poorly suited to lots of storage. Even as a media player it is better suited to play A/V across a network from a server.

viking60 wrote:That's not to bad and pretty perfect for schools if they spend $80 ($60 if they have HDMI monitors) for each computer and hook it up to a server for say $1000 then they have a pretty good solution.

I do think that they can be very useful as cheap PC alternatives... as I said, it is just the misleading marketing of some merchants and reviewers that seems unfair.

viking60 wrote:Chances are that they already have a desktop that can be used as a server.

It won't be a gaming PC but good for real work and media streaming.

I also hate seeing people spending more money than they have to on servers. Using an old desktop is a perfectly reasonable solution for a server - in fact I run a server with many services (smtp, imap, pop, http, https, mysql, irc, rdp, sshd, backups, and teamspeak) on an old P4/3GHz with 2G of memory. It is completely unnecessary to spend a whole pile of money on big fat servers. Of course a school environment might need more than my crappy old P4, but they probably don't need a set of blade servers with fiber NAS storage and Cisco core switch. :-)

Definitely not. They need 6g mem preferably more (but not necessary) and a half decent CPU to run 20 Raspberries. The Raspberries will automatically download the images from the server. If you only use 10 then the above specs will be more than enough.
So teachers can have XBMC for the media class and plain Linux with Libreoffice for the English class. As an XBMC media center I have connected a 2T disk with movies and music; that works perfectly.
Blistering fast and no lag whatsoever.

This is mainly a learning device - but still; it is quite affordable