I am hoping that you folks might be able to provide some advice on the purchase of some security cameras. I live in a sparsely populated rural neighbourhood which has recently seen some vandalism and theft... in fact there are some neighbours who are under the impression that they know who is doing it but have no proof. I would like to get that proof if I can. Here are my basic requirements:
I was thinking of something like this but don't know if I would need something with better night vision, don't have any experience with the software, and don't know if I would be better off finding good software first and then adding in whatever kind of cameras I want.

The software will decide the function and what you need is a software that captures motion so that you boxes are not filled up with lots of pics of that empty parking lot.

Motion seems perfect:
http://www.lavrsen.dk/foswiki/bin/view/Motion/WebHome
(It is in the Arch repos . I bet it is in Debian too)
For Windows I know that I was able to capture only motion with some software from CoffeCup back in the stone ages (It worked well).

Regarding light and to ensure motion for the camera: you could set up a motion detector that lightens up the area (detector +lamp).
It can be infrared or that good old stumble wire or sound based.
http://www.amazon.com/Wireless-Motion-S ... B001LJKLT4
Manjaro 64bit on the main box -Intel(R) Core(TM) i7 CPU 920 @ 2.67GHz and nVidia Corporation GT200b [GeForce GTX 275] (rev a1. + Centos on the server - Arch on the laptop.
"There are no stupid questions - Only stupid answers!"
Top

viking60 wrote:I think that camera looks just fine but I am not that good at surveillance

Looks like it is in the Wheezy repos, I'm gonna setup a box and see what it does... I can just use a USB camera for testing.

viking60 wrote:Regarding light and to ensure motion for the camera: you could set up a motion detector that lightens up the area (detector +lamp).
It can be infrared or that good old stumble wire or sound based.
http://www.amazon.com/Wireless-Motion-S ... B001LJKLT4

Actually the reason I was hoping for a camera that could "see at night" was for two reasons... the first is that a "motion light" would require a digging a trench to run power to it (there is no way batteries would survive when it is -30° out there) and the second is that I do not want to scare them away before getting a good picture of them. In fact I already have a motion light (see photo). The other problem with motion lights is that here in the woods they never turn off... as soon as a deer, bear, coyote, or dog passes by it will come on, and if it is summer time the moths will swarm the light and keep it on until morning.

Hmmm, I gotta join the NSA's forums and ask the surveillance experts eh. :-)

Yeah the NSA would know, and should give you advice and finally do something people want for their tax payers money.

And scaring them off does not sound to bad - a Rottweiler would do the job. 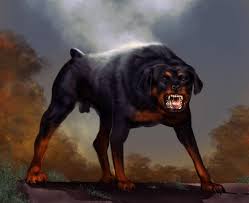 I know for a fact that they are cuddly teaddy bears (but don't tell anyone; it would ruin their reputation):

viking60 wrote:And scaring them off does not sound to bad - a Rottweiler would do the job.

Heh... I have two. Actually one is Rotty/G. Shepherd and the other is Rotty/Husky/Miscellaneous. :-)

I tried out Motion a little last night and although the configuration is awful I think I might be able to use it... I'm going to pickup one of those cameras tomorrow and see if it works with Motion.