It has been revealed lately that Facebook has handed out personal information to Cambridge Analytica - the company that allegedly handled Donald Trump's campaign.

Now these data are somewhat personal and gathered in times where people had no idea of privacy and from people who do not care.

Now they have started caring and are shocked.

Facebook have asked CA to delete the data they handed out in 2015 - which did not happen.

Facebook is shocked about this and have suspended Cambridge Analytica:

On Friday, Facebook announced that it had suspended Strategic Communication Laboratories (SCL) and its political data analytics company, Cambridge Analytica, for violating its Terms of Service, by collecting and sharing the personal information of up to 50 million users without their consent. The incident is demonstrative of ways that Facebook’s core business model — delivering individualized ads to users — can be exploited, while raising uncomfortable questions about how such data might have been used to influence the 2016 presidential campaign.

at least when they are not the ones using them.

People are outraged about FB and are tweeting about deleting their Facebook accounts.

This is not an easy thing to do since many have used FB to log in on countless services so that poses a problem.
From personal experience I know that it is a problem to break off the registration after having read the Terms - and not accepting them!

Facebook simply had no routine for that and treated me as a registered user - in terms of spamming and "friends" request.

Most people push Enter and have no clue that they have sold their first born child ; and for that FB worked just fine.

Why there is a special outcry now? Well Donald Trump and Senator Ted Cruz seem to have that effect.

Politicians in Europe and the US demand that Zuckerberg shall explain this and are very unhappy with this.

Zuckerberg may lean back and simply state that they should be able to read - because his terms are horrible and they have accepted them.

Hell... F-Book is run by spooks. They did the same with O'Bummer's campaign... everybody's data is for harvesting and sell.

Best thing is, stay off it

Sure is...but now maybe some more "nothing to hide" people become aware.

Some of the Data Miners were agencies selling their services by fooling people. They used applications that mined the information from the user and friends. Is legal in a way... when the application is about to install, it prey on the users ignorance. By checking OK and not reading the EULA and/or pay attention to the warnings (the app is tapping on contacts, GPS, Email, etc...). The application was able to spy and report back to the mothership.

Again, the info was not really stolen, was given by the feeble minded users.

Funny though... this data mining was used during the O'bummer administration and nobody said a word. When some other company does it and sold the info to the other candiate, is called evil. 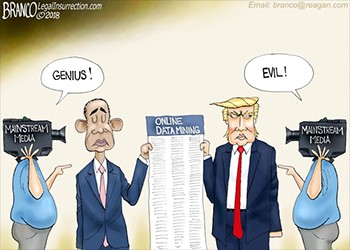 Zuck: Yeah so if you ever need info about anyone at Harvard

[Redacted Friend's Name]: What? How'd you manage that one?

Zuck: They "trust me"

In fact, I never had one. Friends don't put their friends into a giant intelligence database controlled by a megalomaniac who calls his users "dumb fucks" for trusting him. pic.twitter.com/4KaUwRSLMm

As soon as I can get time to sort some things, I am leaving fb and going Ello.
On top of the Cambridge Analytica stuff, I have had several good friends who have died, one just today, and Facebook has become a huge source of pain for me.
No more.
Ello is more artist-centric which is more up my alley, and doesn't do ads, neither do they sell information there.
I'm just done with Facebook, and have already stopped posting.
I'd rather be a free person who fears terrorists, than be a "safe" person who fears the government.
No gods, no masters.
"A druid is by nature anarchistic, that is, submits to no one."
http://uk.druidcollege.org/faqs.html
Top

Well.... My Space was the 1st "Social Media Club" and people migrated to F-Book, now they poisoned by getting in bed with the "Intel Community". Ello.... give it few more years, it will turn in the quagmire that F-Book is now.

What about Diaspora? My understanding is a decentralized system.
Top

Zuckers..... as soon you sign in to F-Book you automaticaly gave consent

But is a lawyer trick. Give the users a huge long document to read and write it on a way that is hard to understand. About 99.999% of the people click yes for the fear to miss out the experience. They do not realized they signed with the Devil

Another one is MS, if you read the EULA, you will not install Windows or use any of the services, including Google, Apple, etc... What about Amazon Alexa, Echo..... Nest anybody? Talk about cars, that you have to Pay for the subscription to track you like a dog and spy on you. My car's OnStar is disabled

In another words.... you have no ownership of anything if you use the Technology.

Diaspora is a bit complicated for me, and Ello has the benefit of being artist-centric. I handle a lot of artists. It's hard enough trying to get them to follow me even to there.
I like their privacy policies as well. I don't believe they are in it for Zuck-style b.s.

The Policies link is at the bottom.
I clicked up Member Data, hadn't seen it before. You can opt out of anything they retain.

Oh, and re: Assange, he actually never did have a fb account. GO JULIAN!
Anonymous and Wikileaks each have one, though.
I'd rather be a free person who fears terrorists, than be a "safe" person who fears the government.
No gods, no masters.
"A druid is by nature anarchistic, that is, submits to no one."
http://uk.druidcollege.org/faqs.html
Top
Post Reply
19 posts