(Edit: You need to go to the bottom of this thread to find the fastest current Super computer)
Did you know that the largest computers in the world run Linux? The so called super computers are monsters that can fill entire parking lots and needless to say they are expensive so they need the very best OS.

The worlds largest computer is the IBM Roadrunner: 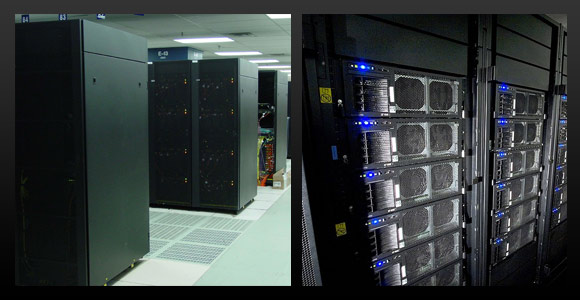 The IBM Roadrunner is capable of 1.71 petaflops and has been the world’s fastest computer since June 2008 and was the first computer able to keep a sustained 1 petaflops performance. It has 12,960 IBM PowerXCell 8i processors operating at 3.2 GHz and 6,480 dual-core AMD Opteron processors operating at 1.8 GHz, resulting in a total of 130,464 processor cores. It also has more than 100 terabytes of RAM. The Roadrunner supercomputer is housed in 296 racks and occupies 6,000 square feet (560 square meters) at the Los Alamos National Laboratory in New Mexico.
It runs on Linux

No.2 on the list is the Jaguar. It is fast but is not as fast as the roadrunner: 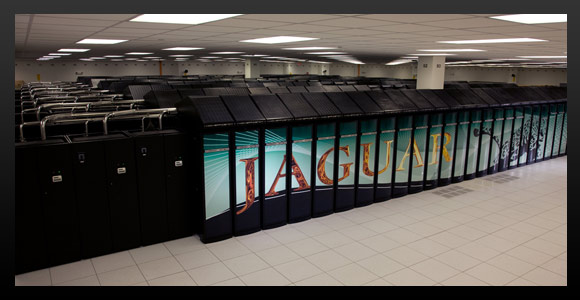 Located at the Oak Ridge National Laboratory, this Cray supercomputer is currently capable of 1.64 petaflops. The Jaguar has gone through several iterations, and is currently using Cray’s XT4 and XT5 architecture with quad-core AMD Opteron processors. It has more than 181,000 processing cores with a total of 362 terabytes of RAM and 10 petabytes of disk space. The Jaguar occupies 284 cabinets, and the XT5 section alone (200 cabinets) is as large as an NBA basketball court. With a performance of just over 1 petaflops, it was the second-fastest computer in the world in 2008.
It runs on Linux

It can do 1 petaflops and is in a research institute in Jülich, Germany

And you guessed it: It runs on Linux

Linux has 88,6% of the super computer market, and that means that it is totally dominating it.
Something to keep in mind the next time someone tries to explain to you that Windows is the better than Linux. When it comes to supercomputing Windows is not a serious contender. The only chance MS has is through Novell.

The article above about computers with unbelievable capacities need some explanations:
PETA (symbol: P) is a prefix in the metric system denoting 1000000000000000 (OneMillionBillion= OneTrillion) = a lot

FLOPSFLoating point Operations Per Second - a way of measuring speed

Seriously though, really good article. And even after your explanation in reply I still cannot quantify that sort of computing power in my head!!
Top

Yes I can say the number but I cannot imagine it either. It just is über fast.
And the problem with iTunes is that it would play the whole album in one peta of a second, so you wouldn't even notice

I wonder if they are running smp linux
I tried it on my network (2 servers and 20 pcs)
and it benched 1.22 tera-flops ( fast enough that it burned up my small router)
the wife wanted to thump me because boy did that thing stink when it burned up
and i had to replace a lot of cable too
since then installed an ibm 16 port with internal cooling
registered Linux user number 505431

I just came across a video of the roadrunner:

It gives some perspective! And as you can see they use Linux.

As of October 2010 the fastest supercomputer in the world is the Tianhe-1A system at National University of Defense Technology with more than 21000 computers, it boasts a speed of 2.507 petaflops, over 30% faster than the world's next fastest computer, the Cray XT5 "Jaguar"

Re: The worlds largest computer is now Japanese

Here is a Video

Anyway IBM has been the worlds major Supercomputer producer all along so it is only fitting that they are on top now.

Oh ... and did I forget to mention that it runs on Linux? CNL and RedHat to be specific. It kind of makes any fanboy discussion on the net about Linux not being ready for the desktop look ridiculous. It is ready for the best computer in the world - and no one in their right mind would even consider Windows here.!

More than 90 % of the worlds top 500 Supercomputers use Linux the rest use Unix....100% of the top ten supercomputers in the world are running on Linux.

I am surprised that Cray still alive. I used to live few miles away from the Cray building in Colorado Springs back in the early 90s. I think they sold the building and moved out.
Top

The Titan can process data with the speed of 17,59 petaflops and that beats Sequoia that can "only" do 16,32 petaflops. The Titan is made by Cray.

Experts are surprised that the Titan "only" can do 17,59 petaflops since they were expecting closer to 20 petaflops.
(This is the average - the top speed is way higher for all of these computers).

But the technology advances since the computer does not take up more space than the 2 petaflop Jaguar (see above) -in fact it is an upgrade of the Jaguar.
So in the future we will probably have laptops with petaflop capabilities - or wrist watches

The Top 500 Supercomputer list clearly demonstrates the superiority of Linux in this area:
469 out of 500 machines on the list are currently powered by Linux. Can you guess what powers the Titan?

The newest winner is Tianhe-2 (a.k.a. "Milky Way 2") with a performance of 33.86 petaflop/s on the Linpack benchmark — more than twice the performance of the top-rated system at the end of November 2012.

The ones that do not run on Linux mostly run on Unix. Windows has a spot on place 187.

Is that good enough for you? While Linux fans and critics obsess about Linux's failure to sweep Windows off the desktop, they're ignoring that Linux is winning everywhere else, and that when it comes to the highest of high-end computing, Linux rules.

Driving the point home, the top 10 fastest supercomputers all run Linux of one sort or the other. You have to go the way to the 44th fastest computer, the European Centre for Medium-Range Weather Forecasts box, which runs IBM's AIX Unix variant, to find one that doesn't run Linux.

Windows? A mere three supercomputers run Windows. The fastest of these, Magic Cube at the Shanghai Supercomputer Center, which runs Windows High Performance Computing (HPC) 2008, placed 187th in the world.

What's interesting about this latest list isn't that Linux dominates. That's become a matter of course. When it comes to supercomputing, Linux rules. It's that simple.

viking60 wrote:I would have been, if they distributed the hot water from this "power plant" to the nearby boilers so the people in the neighborhood could have a cheap shower or a hot bath, or used it for underfloor heating.

Now that... would be brilliant.