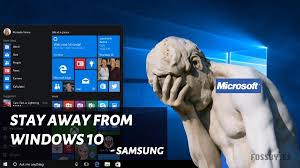 Samsung support had an angry custommer on the line and the problems occured after the upgrade to Windows 10.
Support said that they really did not encourage update to Windows 10 at this point.

They simply warn people about the Windows 10 update nagging!

After the media caught up on it they were forced to deliver the usual bla bla about personal giving wrong information etc. probably not entirely without Microsoft intervention.

Looks like this support guy knew what he was talking about according to a lot of angry Windows users.

The consumer electronics giant's support staff have admitted drivers for its PCs still don’t work with Microsoft's newest operating system and told customers they should simply not make the upgrade.

That’s nearly a year after Microsoft released Windows 10 and with a month to go until its successor – Windows 10 Anniversary Update – lands.

It looks like the Broadcom wireless cards do not work after the upgrade to Windows 10.

Samsung could not provide the drivers and asked the custommer to contact Microsoft directly,,,,and they delivered this;

Microsoft only managed a boilerplate statement attributed to a spokesperson. “Microsoft and Samsung are committed to Windows 10, and are working closely together to provide the best possible Windows 10 upgrade experience,

This guy has done the upgrade and it broke his system so he cannot use the internet - how comforting is it to know that Microsoft and Samsung are "working on it" in that situation?

Normally you make it work first and then deliver it

Good of M4 and Samsung to do the right thing. <sarcasm>
I'd rather be a free person who fears terrorists, than be a "safe" person who fears the government.
No gods, no masters.
"A druid is by nature anarchistic, that is, submits to no one."
http://uk.druidcollege.org/faqs.html
Top

Windows 10 has done a lot for Linux. People are looking for alternatives these days.
Manjaro 64bit on the main box -Intel(R) Core(TM) i7 CPU 920 @ 2.67GHz and nVidia Corporation GT200b [GeForce GTX 275] (rev a1. + Centos on the server - Arch on the laptop.
"There are no stupid questions - Only stupid answers!"
Top

So true.
I'd rather be a free person who fears terrorists, than be a "safe" person who fears the government.
No gods, no masters.
"A druid is by nature anarchistic, that is, submits to no one."
http://uk.druidcollege.org/faqs.html
Top