I think they gave up claiming that they owned Linux code some time ago. It was clearly not true and they never presented anything to that effect.
It is a leftover from the days where MS still had the ambition to be the only OS (that matters) in the world. Maybe there were national interests involved too.

Yes is true. At work we have kiosks that runs on MS. Some kind of vending machines. You can buy edibles and pay with your thumb print. I use my card instead.
Top

As everybody should! Giving them your fingerprint is really a bad idea.
Manjaro 64bit on the main box -Intel(R) Core(TM) i7 CPU 920 @ 2.67GHz and nVidia Corporation GT200b [GeForce GTX 275] (rev a1. + Centos on the server - Arch on the laptop.
"There are no stupid questions - Only stupid answers!"
Top

R_Head wrote:Warranty... against what? Anything that goes wrong is your fault anyway according to MS.

I say, blow it off the water... if you can install Linux on that machine. My little girl loves her Mageia 5, that includes the wife and my mum inlaw. Funny that she is 75 and asked me to get rid of Windows and install Linux instead

I purchased an extended warranty, and on top of that, a drop and breakage, etc. Warranty. They weren't cheap, except for the drop and breakage one. Oddly though, the drop and breakage one, the cheaper one, is the one I don't want to lose.
As I said before as well, I did put a lot of money into Windows-only games. I bought paid versions of proggies (mostly so I could have them on other devices too, such as my android phone and tablet without paying extra for them, or that I could have more than one license for so I could give one to my mum in Colorado - talk about a mum you wish would go Linix, but then who really minds doing paid things for their mums when they can? Not me).
There's also a geeky techie curiousness that says "there has got to be a way to stop this" without paying more. Remember, viking and I both have access to under-the-hoodness for Windbloze from Linux. We can do anything to f*ck it up, if we only know what to do. This in turn could help a lot of people. I know a lot who don't want this upgrade.

I'm still thinking about having it boot straight to Steam, but then with the other things I need to use it for (work), I'd have to set up a whole 'nother user to do it. When my work computer comes in, I won't have to worry about that.

No, I want to figure a way to stop the Microsh*t garbage at every turn I can. Obviously, since I did everything viking said earlier in this thread, what's being released on the interwebs to stop the upgrade isn't working for this. I still have the folder for the 10 upgrade (although it's not being downloaded to), and Windows Update in Control Panel, even with auto updates turned off, it just isn't working.
I'd rather be a free person who fears terrorists, than be a "safe" person who fears the government.
No gods, no masters.
"A druid is by nature anarchistic, that is, submits to no one."
http://uk.druidcollege.org/faqs.html
Top

Come to think of it, if there was a specific order we were to do those things in, I suppose I could have screwed that. That thought just came to me. If so, then what to do about that?
I'd rather be a free person who fears terrorists, than be a "safe" person who fears the government.
No gods, no masters.
"A druid is by nature anarchistic, that is, submits to no one."
http://uk.druidcollege.org/faqs.html
Top

I switched my family by telling them that was a new MS release, the latest and greatest.

Since I set them up and started to use Thunderbird and Fire Fox, they could not see the difference.

Just change the Boot Plash and the Desktop to a MS meme...

Will never know the difference

Doesn't negate that this needs to stop for Windows users who don't want the upgrade. Like me (not that I actually "use" it), and my mum.
She would know the difference.

The insanity has to stop somewhere.
I'd rather be a free person who fears terrorists, than be a "safe" person who fears the government.
No gods, no masters.
"A druid is by nature anarchistic, that is, submits to no one."
http://uk.druidcollege.org/faqs.html
Top

If it is not there; you might have to create "WindowsUpdate".

What does the hex (data field) need to read on this? Mine is different from what you have here - it's all zeroes (except in 0x).

OK, thanks.
I'd rather be a free person who fears terrorists, than be a "safe" person who fears the government.
No gods, no masters.
"A druid is by nature anarchistic, that is, submits to no one."
http://uk.druidcollege.org/faqs.html
Top

Just a heads up. I'm using this thread for a lot of people viking, who are being nagged to the hilt. My mom has just sent me an email that the updates won't stop nagging on her Win 7 laptop, so I referred her to this thread, in particular your second post to this thread. I'm beginning to think it needs to be made a sticky. There are a lot more people even than I know who can use this thread. Can we do that please? Make it a sticky?

Thank you so much.

Your wish is my command -stickied 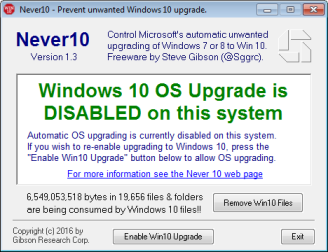